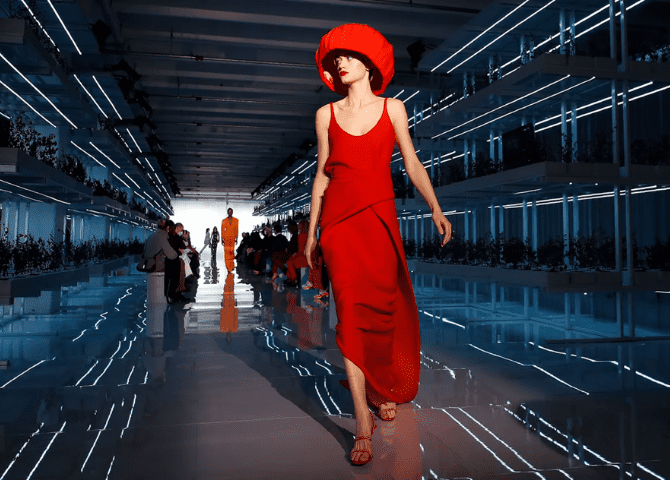 DECODING PRADA-NESS
It was a fashion marriage made in heaven when Miuccia Prada and Raf Simons announced they would be joining forces. For their women’s collection they presented their vision of life after pandemic: think knitted catsuits with vivid patterns, XXL bombers, sparkling dresses and sequined coats. The show was followed by a live talk, a new tradition for Prada digital presentations, where the creative duo talked us through the collection and discussed Prada-ness with their friends including Marc Jacobs, Hunter Schafer and Derek Blasberg.

You can watch the Prada talk here:

OLD HOLLYWOOD GLAMOUR AT MOSCHINO
This season, Jeremy Scott made a show within a show, a parody on salon presentations, popular in the ‘40s and ‘50s. He invited his friends to participate (Maye Musk hosted the presentation in an LBD and pearls and Amber Valetta modelled a golden faux crocodile skin ensemble). Other highlights? Guests including Dita Von Teese and Winnie Harlow turned into models. ICYMI, watch it until the very end for a surprise from Von Teese.

FENDI FEVER
“The Fendi family are women of intellect who work hard — and that’s what I wanted to celebrate,” says Kim Jones. “I’m taking the amazing, strong women who I both know and work with, and listening to their needs,” he continued. “There’s a usefulness to the collection”. The designer wanted to create luxurious yet real clothes for everyday life, and played with the notion of masculine codes in the form of masterfully-cut silk cropped shirts, chic bodycon dresses, tailored camel cashmere coats, leather trench coats.

Before launching his own brand during Milan fashion week, Daniel Del Core was working at Gucci under Alessandro Michele, where he was in charge of the VIP atelier, dressing in the fabulous red carpet looks A-list celebrities, such as Björk, Jared Leto, Lana Del Rey, Beth Ditto, and Florence Welch. For his debut, he made a collection full of glamorous eveningwear: crystal-studded dresses, sharply-tailored jackets paired with chic lace bras, and bodysuits with ostrich feathers, all handmade in his atelier.

Now, discover some of the best looks from London Fashion Week.