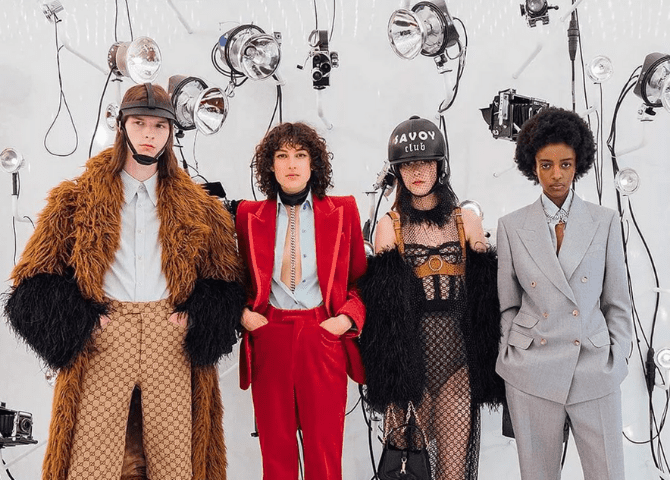 Last year, before the pandemic struck, Alessandro Michele said farewell to fashion week and the old format of shows. In November, he staged GucciFest, a virtual fashion festival, and now, to show autumn winter ’21 ready-to-wear, a video presentation. Poetically entitled Aria (meaning a single voice composition), it was an ode to dreamy dressing in a post-pandemic world.

100 YEARS AND COUNTING
To mark its 100th anniversary, Alessandro Michele revised the best moments from the brand’s rich heritage. “Going through the hour when everything originated is a great responsibility for me, and a joyful privilege,” the Italian designer explained in his show notes. “It means being able to open the locks of history and linger over the edge of the beginning.” So there were references to sexy 90s and early noughties, when his predecessor Tom Ford was at the helm (the crystal covered kitten heel is back, as well as the red velvet tuxedo, made famous by Gwyneth Paltrow at 1996 MTV Video Music Awards). Also some looks reminiscent of Old Hollywood, rebooted equestrian, and of course, the iconic bamboo bag.

THE BALENCIAGA “HACK”“Gucci becomes for me a hacking lab, made of incursions and metamorphoses, an alchemical factory and a place where thefts and explosive reactions happen: a permanent generator of sparkles and unpredictable desires,” mused Michele, announcing his big fashion surprise: an operation with Balenciaga (another luxury heavyweight in the Kering group). Leaked one week ahead of the show, the collection includes signature Balenciaga padded hip jackets with double logos, shoulder-shrug parkas, thigh-high leggings boots and Hourglass bags, emblazoned with Balenciaga logos and Gucci monograms.

FANTASY JEWELS ON THE RUNWAY
A jewellery aficionado, Michele collects antique pieces and always has at least four rings on his fingers. It makes sense then, that he shone a spotlight on the brand’s High Jewellery line, which, featuring precious emeralds, opals, sapphires and diamonds were, was shown for the first time on the catwalk. Elsewhere, there were sparkling crystal-embellished minaudières in the form of a beating heart, a must-have accessory for the post-Covid world.

SOUNDS OF GUCCI
Set to tracks that nod to brand’s gravitas, from Gucci Gang by Lil Pump and Gucci Coochie by Die Antwoord and Dita Von Teese, to Gucci Flip Flops by Bhad Bhabie, models entered an imaginary Savoy Club (a tribute to the Savoy Hotel where Guccio Gucci used to work as a liftboy in his youth) and ended up in a utopian Garden of Eden – replete with horses, peacocks and rabbits, with Vitalic’s Waiting For The Stars blasting.