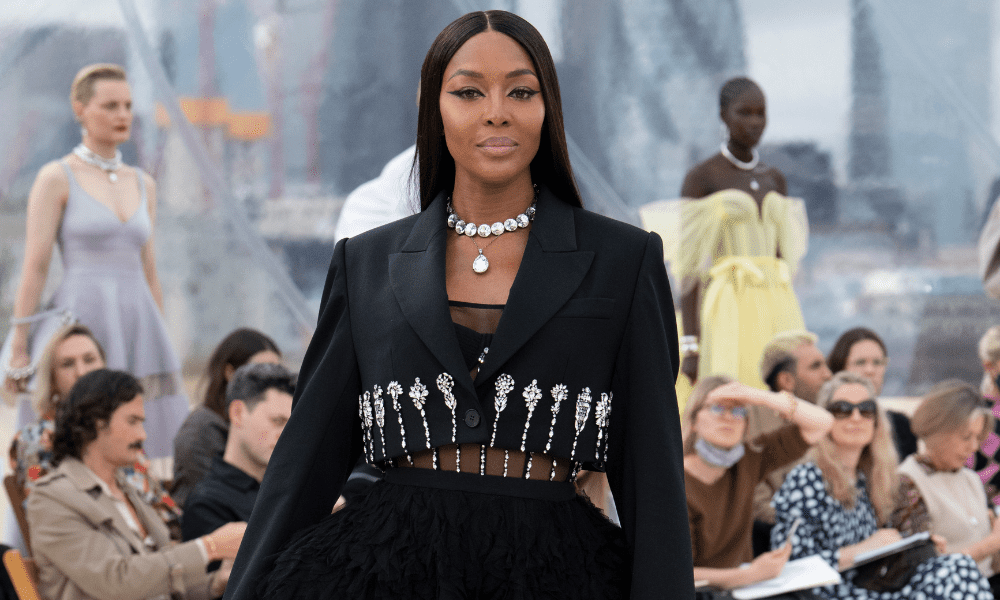 On a not-so-usual blue sky in London (keep in mind that it’s mid-October), Alexander McQueen didn’t wait out the storm, the fashion house brought it! What was McQueen’s return to the catwalks for the first time in five years also marked Creative Director Sarah Burton’s first staging amid the pandemic.A total of 36 looks were presented in Sarah Burton’s home city – where fashion’s FROW and models ascended on the rooftop of a car park in London’s East End – to pay homage to the spectacular skies that Burton and his team see from their atelier. The city’s ultimate sightseeing spots, including Saint Paul’s Cathedral and the London Eye, served as inspiration for the artwork and prints featured in the collection. Colours varied between black, white, blue and yellow without forgetting the different shades of pink reminding us of the formation and colouration of the clouds – from daybreak to nightfall with all their hanging patterns – and clear blue to turbulent ones reminiscent of the skies.

Titled ‘London Skies’, the S/S’22 collection is also an ode to every woman who’s a storm, with skin celebrating a dramatic battle between punk and elegance, softness and edge. Zippers are glamorised on soft tailoring, sports-luxe sleeves and biker cuts set the tone for the new McQueen woman, and chunky boots and chains accentuate tulle corset dresses.

“I love the idea of the McQueen woman being a storm chaser, of the qualities of storm chasing uniting the passionately individual community of characters wearing the clothes. They inhabit the same universe, and the clothes are inspired by and made for them,” explains Burton. “Storm chasing is not only about the beauty of the views but also a sense of mystery and excitement – about embracing the fact that we can’t ever be sure of what might happen next. To give up control and be directly in touch with the unpredictable is to be part of nature, to see and feel it at its most intense – to be at one with a world that is bigger and more powerful than we are.”