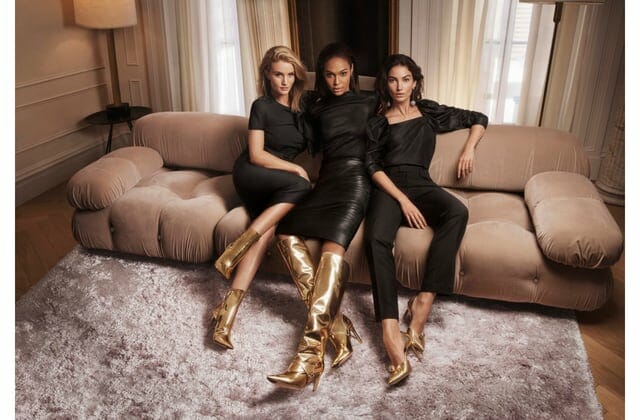 What do you get when you combine Rosie, Joan and Lily? A powerhouse campaign for Jimmy Choo, that's what...

Jimmy Choo has just released its autumn/winter 2018 advertising campaign and its a beauty. Quite literally, because it stars three of the world’s most photogenic women: Rosie Huntington-Whiteley, Lily Aldridge and Joan Smalls.

The supermodel trio front the new campaign, shot by Lachlan Bailey, wearing designs from the brand’s newest range, including a series of gold footwear that’s equal parts eyecatching and elegant. They are also captured in a film by Gordon von Steiner  (which will be released in September), dancing to Best Friend by Sofi Tukker on a girl’s night in.

Speaking of the casting, Creative Director Sandra Choi, said, “Joan, Lily and Rosie are very different girls but combined they embody the essence of the Jimmy Choo woman; confident, daring with a playful side. The girls are friends in real life which created a great atmosphere on set which is echoed in the film and images, they are beautiful and know how to have fun.”

Discover the campaign below…

Now, shop the brand’s new Resort 2019 collection before anyone else on Moda Operandi.