Here's where you can see it
June 11, 2018
Maddison Glendinning 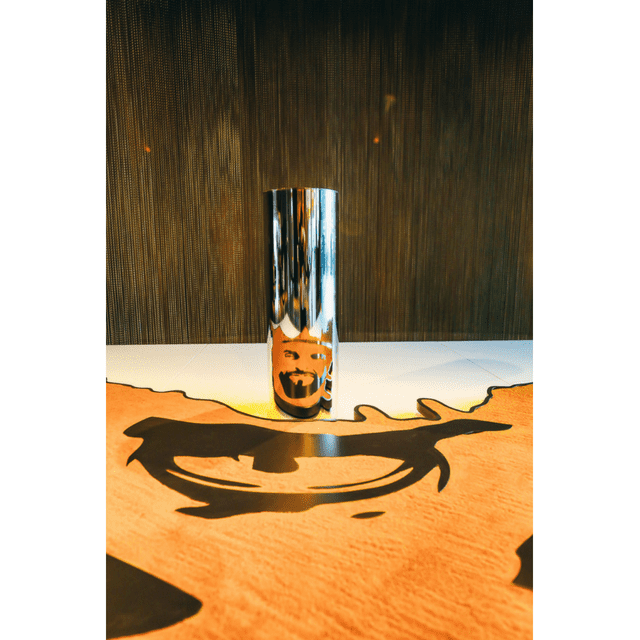 2018 marks the Year of Zayed and to celebrate, one local design firm has created a piece that's on display now. Discover more below...

Sheikh Zayed, the founding father of the UAE, is the focus of this year with 2018 being named as the Year of Zayed. So far, there have been several key initiatives announced, including Zayed, The Inspirer, and a handful of celebratory displays including the Guinness World Record-breaking New Year’s Eve light show display and the unveiling of a memorial in Abu Dhabi.

Now, one local design firm is honouring the UAE’s late founder with a new installation at the Renaissance Downtown Hotel, Dubai. Anna Szonyi, the Director of AR Gallery + Studio (based in d3), spoke with Buro 24/7 Middle East about the piece, called The Man & The Vision, and what she hopes visitors to the hotel will take away from it.

How long has AR Gallery + Studio been open for?

It’s been open since October of last year but the studio has been open in India for six years.

Why did you decide on Dubai as the next location?

Dubai is a strategic point and is now the centre of design and art. There is huge demand here for high-end pieces and art and there are a lot of opportunities.

Now tell me a little about why you made this sculpture and what inspired it?

We’re always inspired by current events and what is happening at that moment; we always try to relate to things happening around the region and the world and reflect that in our art pieces. The Year of Zayed was a good opportunity for us to be inspired and create something.

How long did the sculpture take to make? 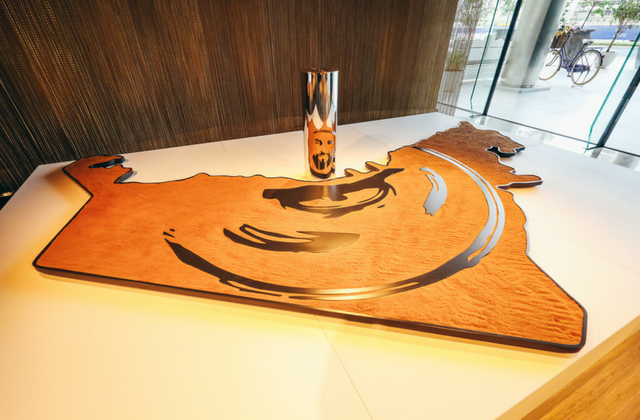 How are the man and the vision represented in this sculpture?

There are two parts to the installation: one is the base and the other is the column. The base is the map of the UAE with extruded ridges and it’s filled with sand. The sand represents the typography of the UAE and the ridges represent the outline of the country. The column itself is placed in a strategic point from where, through its concave surface, the image of Sheikh Zayed, his portrait, is reflected.

Using the map was something we wanted because in the UAE, from the whole urban planning, town planning point of view, designers don’t only look at it from the eye level perspective but it’s quite common that they will look from space. So this was also part of our idea to use the map in this way.

What was the process of being able to reflect Sheikh Zayed’s face onto the column?

Most of our designers are done on a computer as we use a lot of parametric designs. We have started to work on kinetic pieces, too, so it’s all computer generated artworks. There is a tool where you can extrude an image but of course we had to test the size, the position, the diameter, the height, the proportions of the column and the map and how we could place the extruded image.

And what does the column represent?

It represents the father of the nation because his image looks over the UAE, the nation which he created.

What do you hope visitors to the exhibition will take away from seeing the sculpture?

We want them to get inspired and to feel positive. The message of the UAE is positivity and opportunity so we want them to feel that, also.

We are planning on putting it in other locations as well, and are trying to approach different entities to put it in different emirates across the year.

The UAE has obviously specifically inspired this work but how does it inspire the work that the gallery does in general?

We have a lot of artworks that are inspired by the tradition of the UAE. In terms of nature we have many pieces where the typography of the UAE is carved into our pieces, including one where we studied the typography of Jebel Hafeet and carved it as a negative into one of our pieces. We also created a camel sculpture that is related to the region, and the My Dubai city sign, the red one, which is located in d3. This is a totally different design language [to pieces we’ve done before]. It’s abstract but also quite literal.

Now, discover the works of Quim Bové which were inspired by the deserts of the Middle East.